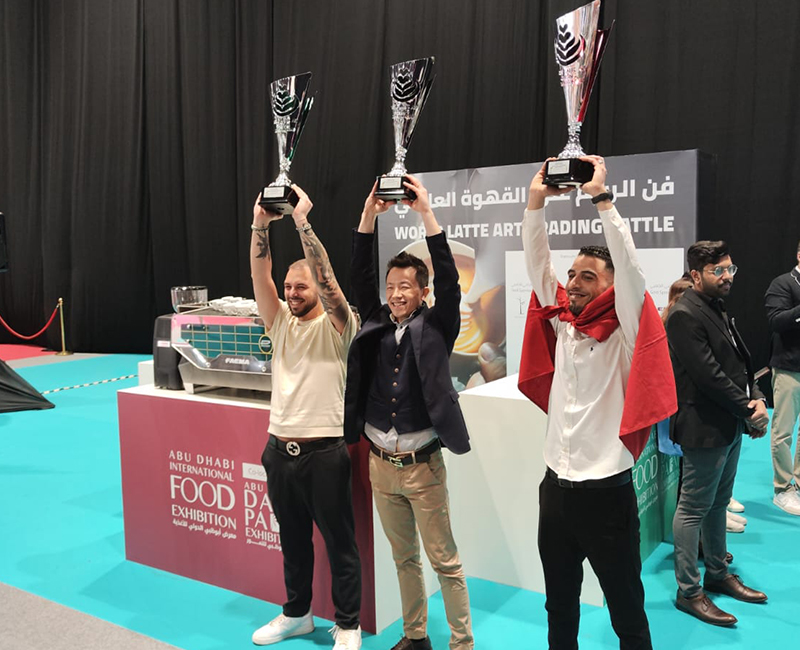 The World Championship of the Latte Art Grading System, THE WLAGS BATTLE 2022, played in the capital of the United Arab Emirates, at the Abu Dhabi International Food Exhibition with the great organization and collaboration of the Chapter in the Gulf Countries Brewever Consulting Co. ended on Thursday 08 December.

Many nations took part, 11 to be exact and about 30 champions and professionals of the latte art discipline, from all over the world, who challenged each other on the patterns required by the LAGS circuit, putting all their skills into practice.

And so from 06 to 08 December the Abu Dhabi fair hosted the third edition of the WORLD LAGS BATTLE and all the latte artists from Italy, Kuwait, Saudi Arabia, the United Arab Emirates, Nepal, Morocco, from Mexico and again from Spain, Vietnam, Thailand and Peru.

Three exciting days full of suspense, professionalism but also of fun, at the end of which the judges of the Latte Art Grading System circuit, respectively Simone Cattani, Maurizio Boi, Nicola Manzo, Fabio Dotti, Diego Campos Vigo and Abdelaziz Qaissouni - from Italy , Spain and Morocco - decreed the world champions of this third edition of the WLAGS BATTLE 2022.

Special thanks also go to Luigi Lupi, LAGS Ambassador who was present and supported these 3 days of competition.

On the green level the currently world champion is Ivan De Rosa from Italy, for the red level Morocco with Ouhaga Mounâïm has been classified and finally on the black level the winner is Zhonghua Hu, known by all as Michele Hu, who confirmed the Italian national victory, taking home the world one too!!

Now it's time to reschedule the new 2023 national selection stages in view of the WLAGS BATTLE 2023 which will be played in Italy and more precisely at the Host Fair in Milan.

Stay tuned to receive all the news!!